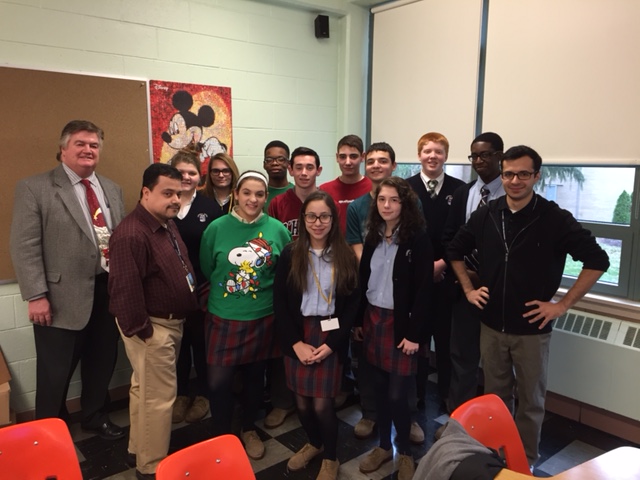 While these are all good possibilities, I think deep down I’ll always know why that time of year was my favorite: the annual production of O’Hara’s 12 Days of Christmas – a video short that took the popular Christmas song and themed it around O’Hara. As an introverted student who wasn’t involved in any additional clubs or sports, the annual production of this short Christmas video was always my chance to shine. What began as something fun started by WCOH Studios, would become an O’Hara tradition. The earliest example available on YouTube is from 2009, but I can remember finding copies that dated as far back as 2006. (WCOH studios still produces a new video each year).

I don’t know what it was about working on this video that was so special to me. I think it was because it was a chance for teachers, faculty, and students to all come together and act silly for this one time each year. My junior year (the 2009 video) was so fun to work on, that I vowed when I would take over the production as a senior, I would do something completely different.

That “something different” would come in the form of the very first “O’Hara movie” as they’ve become known. It was November of my senior year when I said to my Media Production teacher, “Mr. Cook, instead of once again adapting the Twelve Days of Christmas, why don’t we adapt another Christmas story?” “What did you have in mind?”, Cook asked – and even though I pretended to think for a minute, I already had known the answer for months. “Why don’t we adapt Charles Dickens’ Christmas Carol?”, I replied. Mr. Cook heard out my pitch, about a miserable-Scrooge of a teacher who gets visited by three ghosts to convince him to change his ways.

Over the course of the next couple of weeks we had a full-teacher cast that included Mr. Wills, Mrs. Borusiewicz, and the ever so great Mr. Hahn playing a satirized version of himself. It would be the largest undertaking we had ever done for a video production at the school with a script topping 20 pages. But Mr. Cook agreed to let me lead the whole production and even helped me build an awesome team of co-directors (special shout to to Nicole DiCrecchio, Nick Vasek, Brittany DeMara, and Regina Wilkinson).

Long story short, the video would go on to become the highlight of my senior year. It was a difficult, straining production process that lasted weeks, but the end result was well worth it. To make things even better, we were allowed to screen the 20 minute film for the entire student body. At the end, my team and I were pushed on-stage for a standing ovation. As I looked out at the sea of students and faculty applauding, something became very clear to me – this is what I wanted to do with my life.

I followed up the Cardinal O’Hara Christmas Carol with an O’Hara adaption of the Wizard of Oz that Spring and I used both productions to get me accepted into film school. It was an important moment in my life, and I knew I had started a new tradition at O’Hara that would hopefully continue for years to come.

The year after I graduated, students produced an O’Hara adaptation of Elf in 2012 and things looked bright for the future of the O’Hara movies – but then the unthinkable happened. The teachers who helped guide me during my film productions (Mr. Cook and Mr. Konecki) left O’Hara that year and with their departure, no one was left to guide students. What was supposed to be a new O’Hara tradition seemingly died out. Until 2015 that is.

Last year, through a twist of fate and a little luck, I found myself back at Cardinal O’Hara as something I never thought I would be – a moderator. A moderator whose main role was to guide students in the filmmaking process I once went through way back in 2010 – making the first O’Hara movie. From my first meeting with members of what would become the O’Hara Film Club, I could instantly tell the creative energy that existed amongst these great students. They were hungry to do something different, something new, much like I had once been.

They conceived an idea for an O’Hara adaptation of The Grinch. They came up with the idea, learned how to write a script, and then got to go through the entire production process. These were students who had been greatly interested in filmmaking, yet had never been given the chance or guidance to actually make films. And with just a simple amount of guidance on my part, these students picked up the pieces and produced a film that rivaled any video that I, or any other O’Hara student had ever done before.

When I was a senior, there were about five of us who were genuinely interested in filmmaking. The O’Hara Film Club currently surpasses 25+ members today. I think that is a testament to the evolution of students’ creative interests. My hope is that our very own Film Club encourages other high schools in the area and around the country to invest in student filmmaking. It is a powerful medium and a tool for expression that, in my opinion, is drastically underutilized in secondary education. For the past 50 years, high school theatre/drama has been the go-to for creative expression. We’re getting to a point now where technology has evolved, as have students’ interests and passions and I think it’s time we start placing as much emphasis and backing on student film productions as we have on student stage productions.

Since that the initial success of the students’ Grinch adaptation, our club has gone on to produce several more short film pieces including an incredible O’Hara adaptation of Back to the Future and they are currently working on many other films as I write this post. Several Film Club students have used their work in the club to get accepted into film school – much like I did way back when. To date, the “O’Hara movies” through the years have surpassed over 150,000 combined views on YouTube. There are students who come to open house who specifically state they want to come to O’Hara “to make movies” which to me is incredible.

Every time we premiere one of our videos and my students take the spotlight, I get to see that same look in their eyes – that look I once had that says “This is what I want to do with my life”. And it is through them that I’m reminded of the same exact thing – helping students realize their full potential through the art of film has been my renewed purpose in life and I hope it continues for years to come.

Nestled in the heart of Delaware County, Cardinal O'Hara is home to more than 1,000 students from 54 zip codes in three states. Our mission is to develop "graduates of character, competence and confidence to lead in this world and live forever in the next." For more than 50 years, we have been educating young men and women in our Catholic faith and we are proud to share that we have more than 30,000 alumni from around the globe. Learn more about O'Hara at www.cohs.com.
Loading Comments...
%d bloggers like this: